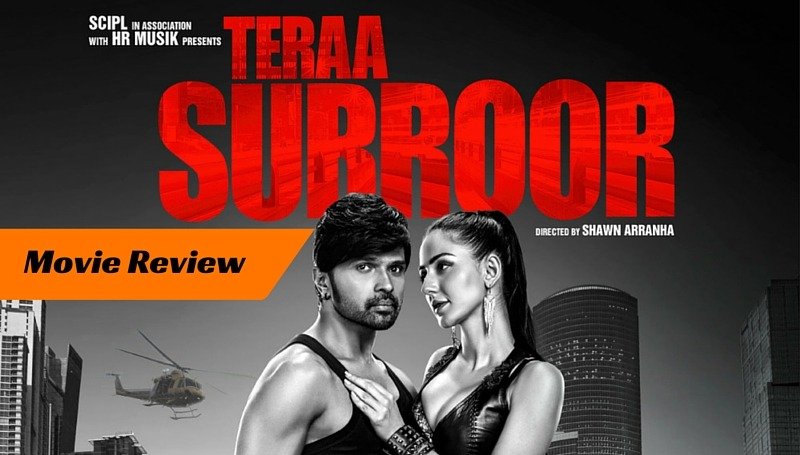 High kill count? Check.
Even higher Bullet count? Check.
Foreign Locations? Check.
Hero has a Toned Body? Check
The Actress is hot? Check.
Irrelevant Item Song? Check.
Unnecessary explosions? Check.
Good Music? Check.
Yes! We can make an action movie. We will Make an Action Movie.
Probably the makers of Teraa Surroor had similar thoughts before making this movie. And perhaps, these were the only thoughts that they ever had during the making of this movie as well.

Well, I had some reservations before going to watch this movie, as I am not a big fan of Himesh, the actor. But I went to watch the movie with a slight hope of it turning good. Unfortunately, to my dismay, the movie was just as I would have hoped any movie to not be if I am going to pay for it.

Well, honestly, this review is going to be a hell lot entertaining, #JustLikeTheMovie.

Himesh is back with another acting outing with Teraa Surroor. It is produced by Super Cassettes and HR Musik and Directed by Shawn Arranha. It stars Farah Karimaee, Monica Dogra, Kabir Bedi, Shekhar Kapoor and Naseeruddin Shah along with Himesh Reshammiya. Yeah, I know that appears as a fine cast, except it isn’t.

The movie is the story of Raghu(Himesh), a gangster in Mumbai who is in love with Tara(Farah). After a fight with Raghu, Tara goes to Dublin, Ireland to perform in a function on the invitation of a person called Aniruddh Brahmin. But when she reaches there, she is caught with narcotic drugs and arrested by Dublin police for the same. She calls Raghu to help her and Raghu, after some minor legal efforts to take her out, decides to escape from Dublin along with Tara. For devising the escape plan, they take the help of Robin ‘Bird’ Santino(Naseer).

Anything that we say in praise of the acting would be an overstatement. With the names like Kabir Bedi, Shekhar Kapoor, Shernaz Patel and Naseeruddin Shah associated with the cast, it was expected that something would be good to see in the movie. However, it won’t be wrong to say that it is a ‘Collective Effort to Bad Acting’. Only Naseer Saab and Shernaz Patel manage to do justice to their roles. Kabir Bedi is just like any other roles that he had played ever. Shekhar Kapoor acted a tad too much for his role. The antagonist (whose name I must not tell, not because he is Voldemort, but for the sake of a little bit suspense that the movie might offer to some audience if they wish to watch the movie even after reading this review), is way ahead everyone else in terms of acting. He packaged all the performance that he could exhibit in just a single encounter with Himesh. He could have managed a complete movie with that much acting. But #HisChoice.

Talking about the lead cast, Farah looks pretty and that is all she does throughout the movie. They could have dubbed her voice better, as it is evident someone else is voicing her. But the cherry on the cake is none other than, our very own, Himesh Bhai! He had managed to do what any other actor possibly can never do in any Indian movie. He managed to keep a single expression throughout the stretch of the movie(which itself, was just Himesh Reshammiya).

While I cannot point out any exact movie with the same story, the story doesn’t seem unique. Also, it is full of loose plot points. For example, Tara goes to Dublin on the invitation of a guy, with whom, she has just interacted through Facebook. She never heard his voice before coming to Dublin. I wonder why would anyone go so far away when I prefer not to travel from Bhopal to Indore in such situations.

Also, the story has every possible cliché in an action movie, moving to foreign locations(within 30 minutes of runtime), tragic backstory(not even close), SPOILER!! The hero isn’t a gangster, but an undercover assassin. END OF SPOILER (or so the makers thought it was).

Over the top. Unnecessary. Irrelevant. Lots of bullets have been wasted for this movie. I hope they are reusable to fuel six other action movies including a war movie. Himesh looks so misfit in the combat scenes. We won’t say any further.

Music is the only saving grace of the movie, but not in the movie. Due to all other factors going against the movie, the music has nothing else to complement it. As a result, it is ineffective. Himesh tries to reconnect with his loyal fans by bringing re-mastered versions of Teraa Surroor (the song) and Tanhaiyyaan. which can be heard, but outside the movie. The background music is horrific, terrible, scary and any other such adjective as suitable.

Juvenile editing. Not even trying a little to add impact to the story. Looks like the movie is edited by some film school student who thought he was just doing some homework stuff. He gave all the types of cuts he could. None of them proving effective. It is more like annoying. The loose editing can be easily spotted when the traces of crew can be spotted in the frame. Such shots should not be in the final product, considering that they were highly unimportant to the scene.

When everything else goes wrong, the person who should keep a check is the Director. Considering that, the direction is a Big Fail. It appears as if Shawn was making a movie to relaunch Himesh, and not for the sake of movie making. He shows Dublin way more than what could have been effective. Irrelevant song sequences, with all-the-same picturizations, could have been easily avoided. There is way too much narration in the movie, which clearly shows that director did not put enough heart in storytelling through images.

We recommend, hope, and request you to not watch this movie in theatres. Rather, go watch the World T20 Qualifiers. They would be way more interesting. However, if you have nothing to do, and want to laugh at yourself for watching the movie, go watch it. It actually is a funny movie, funnier than Humshakals. But as an action movie, a big NOPE. Last words, we must mention that Teraa Surroor is actually an honest movie, which mentions in its title itself, that it is a ‘Lethal’ story, lethal to the viewers.

Did you watch the movie before reading this review? We feel sorry for you. Do you find the review helpful? Do you think we missed any point? Let us know in the comments section below. Tata.

PrevPrevious PostShort of the Week: ‘CUDDLY’ by Karan Shetty
Next PostTop 7 Qtiyapa by TVF That You Must WatchNext