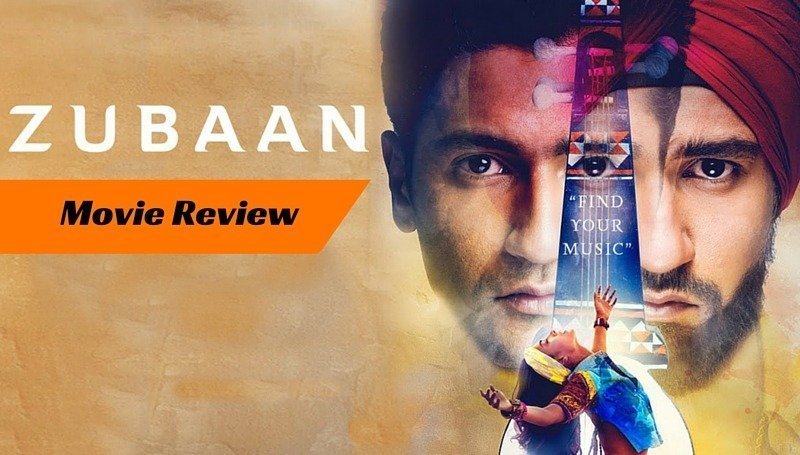 With the music of Zubaan facing widespread praises from music lovers nationwide, the expectations from this movie were a tad high. Did the movie justify those expectations? Or did it fail miserably by being a wannabe-Rockstar? Read down here.

Zubaan is a story about a Sikh boy Dilsher/Harpreet played by Masaan fame Vicky Kaushal, who wants to become successful just like his idol, Gurcharan Sikand(Manish). He through hooks and crooks manages to reach Sikand and becomes his confidant. Sikand, on the other hand, shares an unpleasant relation with his son and wife. He finds the son that he wanted in Dilsher. This generates a rivalry between Sikand’s son and Dilsher. During his journey to success, Dilsher meets Amira, who makes him revisit his past, where he used to sing with his father and has developed a fear of music, which makes him stammer ever since his father died. The movie revolves around Dilsher’s conflict between his ambition and his musical connection thereon.

The acting by all major cast members is commendable. Manish Choudhary, who is commonly known for his role in Ranbir starrer Rocket Singh, portrays the role of the wealthy tycoon, Sikand to precision. Sarah Jane Dias as Amira looks pretty. She does her best to the role given to her. However, the one who takes the cake away from everyone else is none other than the star of the movie, Vicky Kaushal. He proves with his performance that he isn’t a one-film wonder. Dilsher was a complex character played effortlessly by Kaushal. His chemistry with Manish’s character is worth watching.

The movie seemed to sway between the A plot (finding morality in success) and the B plot (facing the fear of music). When plot A was touched, there wasn’t much for plot B and vice-versa. However, if we take both the plots as separate stories, they seem fine, with a slight edge in favor of plot A. The story, apart from the fact stated here, seems to engage. especially in first half, where much is not revealed. The second half looks highly complex and fails to engage. The divinity of music is vaguely touched in the story that revolves around that concept. The screenplay is smooth.

The editing of Zubaan is pretty impressive with intercutting sequences making it a thrill to watch. The use of sound in editing is worth noticing.

For a film that boasts ‘Find Your Music’ as its sub-title, had to have a music that stands out, and it does. Songs like ‘Ajj Saanu O Mileya’ and ‘Dhruvtara’ are the highlights of the movie. Apart from these, the overall background track is also marvelous. Read the full review for Zubaan’s music here.

The movie could have been a masterpiece, with the phenomenal acting and outstanding music. However, the weak direction holds it back. But we do not blame Mozez for it. The movie was a great concept and required either expertise or exceptional talent, which the debutant could not manage to display. Mozez does impress in bits of the movie, specifically in the first half. But overall, he seems not to have a just decent grip on the project.

While Zubaan has marvelous performances and exceptional music, it doesn’t keep you involved until the end. It is a movie that might fail to connect to a mass audience. However, if you are looking to watch a movie with a brilliant acting exhibition that talks about self-realisation, go watch it.