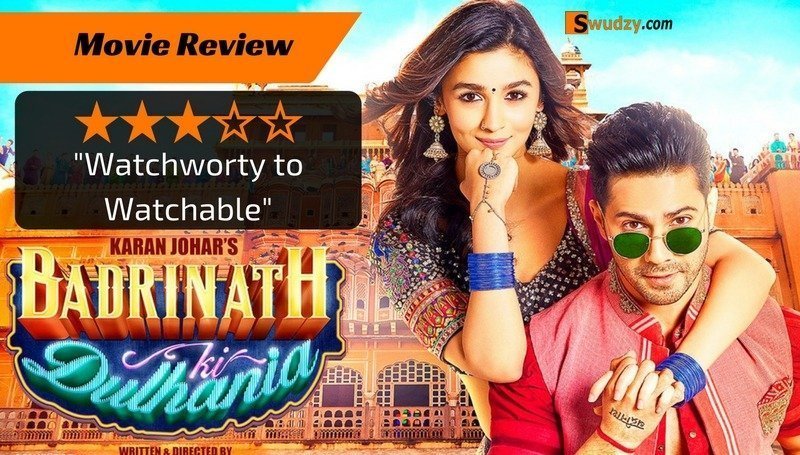 If you have watched Humpty Sharma Ki Dulhania, you must know that the team behind it is well equipped with capabilities to make a fun filled ride. And hence it is justified to expect a similar level of enjoyment in the latest offering by the team. Badrinath Ki Dulhania almost matches up to the expectations by being an all out entertainer in the first half. But is it enough? Read the full review below.

Watch the trailer for the movie here,

Badrinath Bansal is a younger son in the Bansal family from Jhansi. His father is an orthodox patriarch and uses his ‘oxygen cylinder’ as a ‘weapon’ to get his wish done in the family. Badri’s elder brother was a victim to this weapon and had to forget his love to marry a girl of his father’s choice. At a wedding ceremony, Badri spots Vaidehi and develops an urge to marry her. Vaidehi, on the other hand, is a career-centric girl studying in Kota. She has had suffered a bad relationship in past and gets taunted because of it by his father, who apparently has an ‘oxygen cylinder’ of his own. Badri sends a wedding proposal to Vaidehi’s house through his friend Somnath’s wedding portal.

Vaidehi outright rejects the proposal. Upon constant insisting by Badri, she agrees to think about the proposal if Badri finds a suitable groom for her sister. Badri does the same and Vaidehi’s sister and family convince her to get married. But on the day of the marriage, she elopes.

A month later, Badri and his family find out that Vaidehi was in Mumbai and now is in Singapore getting training to be a flight stewardess. Badri’s father orders him to hunt her down and bring her back to Jhansi so that they can hang her at their door as a punishment. Badri and Somnath set towards Singapore to confront Vaidehi. इसके आगे का Cinema hall में जाके देखना.

Shashank Khaitan deserves a pat on the back for the ultra entertaining first half that he has woven. It is full of funny dialogue exchanges from Badrinath, Vaidehi, and Somdev. Somdev stands out from the complete lot as a character well written. One instance that I may never get out of my mind(perhaps) is the scene in the bus where Badrinath is trying to woo Vaidehi, while Somdev is trying out on her sister. And an onlooker is trying to intervene, to aid the ladies. That is one brilliant set of dialogues. And that is not just the only good dialogue instance.

The characters that Khaitan tells are relatable, but not impacting. Each of them has their character arcs and come full circle. However, the character of Vaidehi was either underutilized or mistreated. The screenplay also, loosens up in the second half, as we get closer to the characters, understand their point of view, but we are not affected greatly.

Starting with the lead, Varun Dhawan‘s Badri is loveable, funny, entertaining, and relatable. Another heartfelt performance by him. He shows traces of Salman Khan and Govinda in his performances. Sahil Vaid shines out bright in the movie with adequate hilarity and seriousness. However, it is Alia Bhatt, which disappointed. Not to take this otherwise. She was fine, but this was her first performance after SOTY, that failed to leave an impact on me. That being said, I Love You, Alia.

Coming on to supporting cast, Swanand Kirkire is adorable as Vaidehi’s father. Yash Sinha and Shweta Basu do their job and are acceptable. But, Rituraj Singh‘s Mr. Bansal looked like a failed attempt at a ruthless orthodox father figure. He is a brilliant performer, but this particular role looked out of line.

Ahem! Disclaimer: This section is not about the overall quality of a song, but the use of that song in the movie, it is a movie review after all. Duh.

The first song in the movie is ‘Aashiq Surrender‘. It is a good song, and fits somehow in the situation, but is not engaging enough. ‘Sun Mere Humsafar‘ is the best track in the movie and involves the audience an inch closer in the story. ‘Roke Na Ruke Naina‘ sounds nice, fits the situation and is soothing. ‘Tamma Tamma Again‘ is a total misfit. I mean, in the last scene, the pair is feeling sad at the thought of separation, and next second, they are dancing in a pub, with no sense of that feeling anywhere in their body language. A bad utilization of a good recreation(without rap, the rap is a misfit in the song, personal opinion.). Background music is dealt nicely. Overall a decent note.

Shashank Khaitan tries to replicate Humpty’s impact, but to me personally, Badri fails to live up to that entertainment. He manages good performances, decent music scores, but, misses out a fine edge on the screenplay. He is surely a great director of dialogues. But the flaws are not so big that he be criticized. He manages to keep the movie engaging.

Badrinath Ki Dulhania rides high on the mass appeal and entertainment value. The brilliant start does not long till the end but, the movie is watchable regardless. Long Story Short, First Half अच्छा है, Second Half ठीक है, Movie देखी जा सकती है.

Did you watch the movie? Did you like the movie? Do you agree with our review of the movie? What part of the review did you like most? Do you think we missed some part in our review that you would like to mention? Head down to the comments section below and leave a reply. Also, do not forget to share the review with your friends. Coz it’s more fun with friends around. We will be back with more reviews of trailers, music, and movies, and other stuff. Till then, #KeepLovingCinema.

Also, Do not forget to watch Swudzy’s first Short Movie ‘JUMP‘ that released on 31st May on our YouTube channel. Watch the movie right here. Also, stay tuned for the next project which is to be announced soon.

PrevPrevious PostRAEES TRAILER OUT : The Wait is Now Over
Next PostKONG SKULL ISLAND Movie Review : Flying Too Close To The SunNext