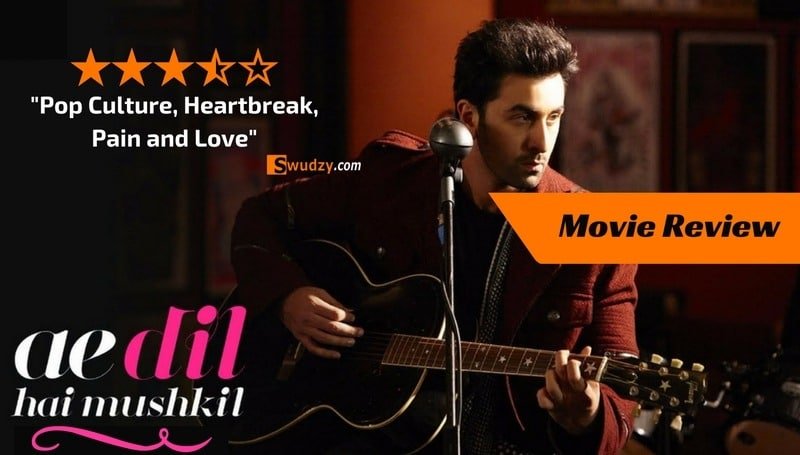 Gosh! I can just not get those lines out of my mind. Ae Dil Hai Mushkil is just another example how aware Karan Johar is about the use of music in his movies. But music is not the only awesome aspect about Ae Dil Hai Mushkil. Yes, the movie managed to release on its scheduled release date amidst the controversies regarding Pakistani actors. And it sure is a movie which deserves to be released.

Ae Dil Hai Mushkil is a romantic drama movie written and directed by Karan Johar. The movie is co-written by Niranjan Iyengar. It features Ranbir Kapoor, Anushka Sharma and Aishwarya Rai Bachchan in the lead roles. It also features Fawad Khan in a supporting role, along with Shah Rukh Khan, Lisa Hayden, Imran Abbas and Alia Bhatt in cameos. The movie is produced by Fox Star Studios and Dharma Productions. The music of the movie is composed by Pritam and lyrics penned by Amitabh Bhattacharya.

Ayan Sanger is an aspiring musician who meets Alizeh at a pub and after initial and short-lived attraction develops a special bond with her. Alizeh is a bubbly girl with clear life goals but twisted and scarred love life. She finds a great friend in Ayan, who has started developing a romantic inclination towards Alizeh. Enters Ali, Alizeh’s ex-boyfriend, and a DJ by profession who claims that he wants to get back with Alizeh. To Ayan’s surprise, she agrees to it. Weeks later, Alizeh invites Ayan to their wedding and Ayan, even though unwilling, decides to go.

At the wedding, Ayan tries to gel up but ends up confessing his love to Alizeh and leave the venue. On his way back home, he meets Saba(Aishwarya), a shayra(poetess) by profession. She listens to his story and understands her. They start flirting over the period and get into a relationship without commitments. However, even after all this, Ayan cannot get Alizeh out of his mind, while Saba starts getting emotionally attached.

While I personally did not find the story and screenplay amazing, it is engaging nonetheless. The characters are well built with Saba being the most crucial of them all. Ayan and Alizeh also work wonders as characters. However, I found Alizeh’s character curve under-explored.

The first half of the movie is a blockbuster entertainment ride. Each minute packs with it loads and loads of entertainment, humor and feel. Such, that at the interval point, I was convinced that even if the movie ends here, my money is well recovered. However, the second half did disappoint me. Especially a cliched twist that Karan Johar tried to give it ruined the second half for me. Some might find it interesting.

The dialogues of the movie are brilliant throughout the runtime. This article by Lyricsmint has some examples of the brilliant dialogues that the movie has. What disappoints in the story and screenplay is well compensated by the dialogues. Also, the stuff that is the best part of the movie is the multiple references in the movie to pop culture and icons. These references range from Mohd. Rafi and Mother India to Madhuri and Sunny Leone. A big standing salute to the writers.

I have said it before, and I will say it again. Ranbir Kapoor is a volcano of talent and with every movie it erupts with a roar. He has effectively portrayed Ayan with his voice, eyes and body language. Karan Johar also revealed his method to extract performance from Ranbir in this interview, which makes it even more interesting.

Aishwarya is a muse every artist dream of. She looks gorgeous and has a magical aura on the screen that screams sexy. The depth in her character is well complemented by the brilliance of portrayal. Anushka plays Alizeh, which is brilliant in the first half, but the second half did not convince me enough.

Fawad Khan is skippable in the minor role that he has. It appears the controversy made the makers chop some of the screentime that he might have had, we do not assure of it though. The cameos by Alia Bhatt, Imran Abbas, Lisa Hayden and above all Shah Rukh Khan add just the right amount of salt and pepper to the taste of the movie.

Ae Dil Hai Mushkil is a clear winner at music and songs. Each and every song in the movie is epic. And their placement in the narrative of the movie makes it even more interesting. Right from the soft and low volume bits of ‘Alizeh‘ when Ayan is asked about his love, to the hard hitting Title Song in the third act. Every note speaks wonders. The ‘Breakup Song‘ is also a brilliant party hit. ‘Bulleya‘ hits hard and takes in a trance.

However, my personal favorites are ‘Cutie Pie‘ and ‘Channa Mereya‘ in quick successions. What looks like a fun wedding song is efficiently used to portray pain that one of the characters has, and then the second song  amplifies that pain. Loads of Love to Pritam and Amitabh Bhattacharya for creating possibly the best music album this year so far.

Karan Johar is a director who is expressively creating some works that connect hard. Right from the flashy NRI family drama to the flashy student drama. He had an image of being over the top, which he himself shatters to a large extent. And honestly, it is the most different movie that Karan Johar has ever made. He must also be complimented for the brilliant music sense that he has, which makes all the songs of his every movie, a repeatable track. Awesome direction, but it could have been outstanding had the second half been dealt better.

Ae Dil Hai Mushkil is a brilliant entertainer in the first half and a decent emotional ride in the second. It makes you sing with it, laugh with it and at times cry with it as well. The dialogues are memorable, the songs are worth playing on repeat all. The performances are engaging and Aishwarya is stunning. The multiplex audience is going to enjoy this movie more than Shivaay. Go for it if you are one of them.

Also, Do not forget to watch Swudzy’s first Short Movie ‘JUMP‘ that released on 31st May on our YouTube channel. Watch the movie right here. Also, stay tuned for the next project which is to be announced soon.