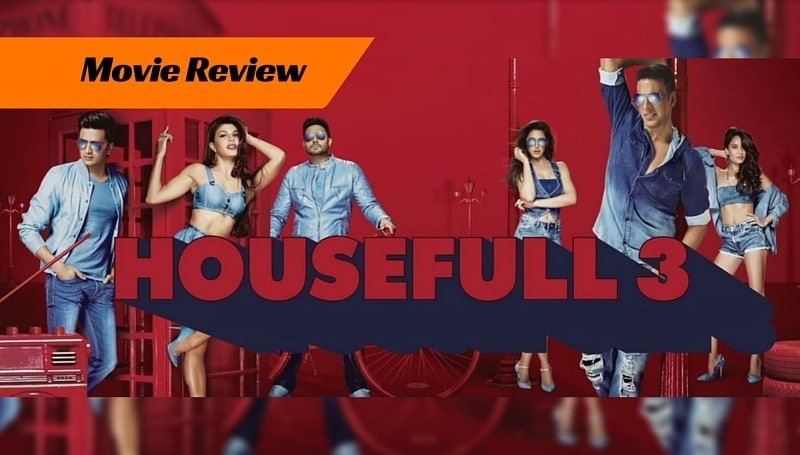 The third movie in the pretty popular Housefull franchise has hit the theatres and here we are with the movie review for the same. For this installment, The duo synonymous with the current scenario of Bollywood Comedy, ‘Farhad-Sajid’ fill the director’s chair replacing Sajid Khan. And to be honest, the movie did give us a few laughs, but not as much as the previous movie. The movie is stupid, but that was a prerequisite before going in. Regardless, here is the detailed HOUSEFULL 3 Movie Review for all you guys out there.

Hey! Sorry for interrupting the movie review. Just an update. Swudzy.Com has recently released its first short movie ‘JUMP‘ on its YouTube channel this Tuesday. In case, you missed the movie or did not come across it so far, here is the link to the movie. Do watch it and tell us how it was. Always eager to know how you feel.

Coming back to the review:

Housefull 3 is the third movie in the Housefull franchise by Nadiadwala Grandsons Entertainment and features Akshay Kumar, Riteish Deshmukh, Abhishek Bachchan, Jacqueline Fernandes, Lisa Hayden, Nargis Fakhri, Boman Irani, Jackie Shroff and Chunky Pandey in it. The movie is directed by Farhad and Sajid and is produced by Sajid Nadiadwala and Eros International.

The plot of the movie revolves around Batuk Patel(Boman Irani), a wealthy businessman in London who has three daughters, Ganga(Jacqueline), Jamuna(Lisa Hayden) and Saraswati(Nargis). Batuk does not want his daughters to get married for some reason, but all three of his daughters fall in love with Sandy(Akshay), Teddy(Riteish) and Bunty(Abhishek). Sandy is a patient of split personality disorder who transforms into Sundy and tries to harm himself and others on hearing the word ‘Indian’ He fakes love with Ganga to get rich and fall out of depression. Teddy and Bunty also fake their respective loves for the money that they will use for their passions for Car-Race and Rapping respectively. Regardless, The daughters get their boyfriends into the house somehow and convince Batuk for their marriages.
Later it is revealed that Ganga, Jamuna, and Saraswati are not Batuk’s daughters but an Indian Don, Urja Nagre(Jackie) is their real father, who was sent to jail in Mumbai upon an informer leaking his location information. Batuk wants to marry the three girls with his three sons, who themselves were in prison for some time. Meanwhile, Urja is released from jail and comes to London to see his three daughters, who do not know that Urja is their father. The Fun starts to escalate when Urja, Batuk, the three sons, the three daughters, and their three boyfriends, are in a single house.

The story was expected to be mediocre and it is with a lot of scope for questions and loopholes, but hey! When you go to watch a movie like Housefull, you are required to keep rationality at home. Talking about Screenplay, it is flawed and fails to build up the level of confusion that the last movie of the franchise developed. The fact that the three boyfriends fake different disabilities to Urja and Batuk was enough to create laughs worth the whole second half, but are reduced to three gags. Remember the confusion with ‘Jolly’ in Housefull 2. That was damn good. Akhri Pasta is underused in this movie.  Talking about the dialogues, there are plenty of facepalm worthy dialogues in Housefull 3. Especially all the dialogues with the three ladies trying to literally translate English slangs into Hindi. The dialogues of Riteish’s characters are also somewhat mediocre in generating laughs, except that sometimes it does give you tickles. The movie tries to capitalize on the puns related to the real life of the characters, but it too falls flat except the time where Abhishek saves Aishwarya’s wax statue from falling and gets up to fight the bad guys saying ‘Ab Ye Personal Ho Gaya Hai‘. That was hillarious.

Akshay Kumar in a comedy movie doesn’t need to be reviewed anymore, even in a mediocre script, he has a caliber to stand out as an outstanding performer. And here also, he will make you laugh and clap. His walking style as Sundy is hard to take out of our minds. Riteish can now be comfortably referred to as the ‘Go-To‘ actor for an Indian comedy. He is extremely genuine in the performance. Abhishek gels up with the two comic legends perfectly. Even if he doesn’t outshine in the movie, he has a sincerity to his role and you will be bound to appreciate it. The three ladies can simply be said to be useless in the movie except for featuring in dance sequences. They did not have much to contribute, but do justice to what was expected from them. Boman Irani is the main attraction of the movie and most of the part in the runtime, the movie is carried on his shoulder. Jackie Shroff and Chunky Pandey are underused.

The music lacks in quality, but the songs definitely suit the mood of the movie perfectly. Songs like Taang Uthake and Pyaar Ki Maa ki (Except the hook) are catchy and groovy. Malaamaal looked unwanted and could have been skipped. Well, all the songs could have been skipped but Malamaal should have been the first one to be dropped. However, what wins the race of music is ‘Fake Ishq’ by Tanishk Bagchi. We are saying, this guy is emerging in the music industry with some extraordinary music sense and a range varying from Rabba, Allah Hu Allah(Sarbjit), Bolna(Kapoor and Sons) and now Fake Ishq. Overall, the music is average.

The movie is not a masterpiece of comedy, but it has some decent laughs. Farhad and Sajid have definitely improved since It’s Entertainment and weave it better than earlier. The physical gags are fine but could have been better. Overall, it is a decent directorial effort.

Summing up, the movie is funny, but not a laugh riot. There are a few genuine laughs and a lot of attempted gags that fell flat like the translation of English Slangs in HIndi. Plenty of facepalm moments, but if you go for the cheapest show in the morning, you might not feel cheated with your money. Definitely a better comedy than Mastizaade or Kya Kool Hain Hum 3, but not as good as Housefull 2.

PrevPrevious PostPHOBIA Movie Review : Must Watch This Brilliance of Horror
Next PostJUMP – A Short Film on Student Suicide | By NiketNext