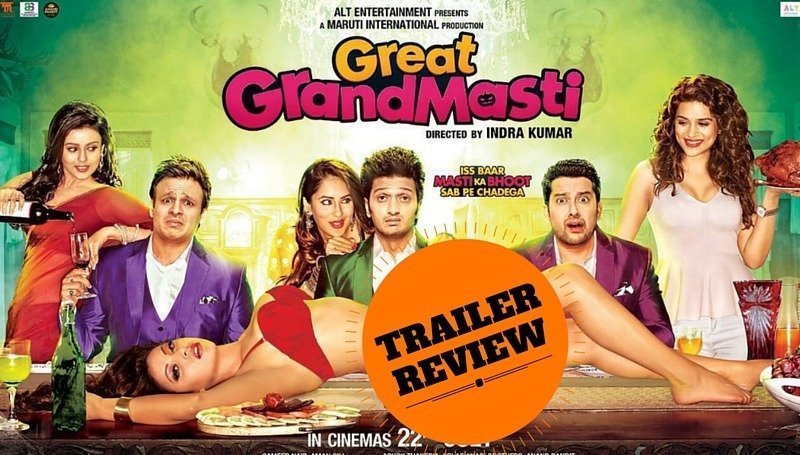 Well, I am personally not a huge fan of the adult comedy genre, and I feel it has been used abruptly and pretentiously over the past few years in India. But, I also feel, that the genre, if dealt with proper seriousness, can produce awesome hilarious movies. Clearly. the ‘Kya Kool Hain Hum‘ and ‘Masti‘ franchises have not been doing that so far. However, the latest Great Grand Masti trailer feels like it will be different. Read down below for Great Grand Masti Trailer Review.

Great Grand Masti is the third movie in the Masti franchise. The movie is directed by the director of the first two movies, Indra Kumar. The movie also features the lead gang : Riteish Deshmukh, Vivek Oberoi and Aftab Shivdasani in the lead role. It also has an inclusion of Urvashi Rautela in the main lead. The movie also features Sanjay Mishra, Shraddha Das, Mishti and Pooja Chopra. It is produced by Balaji Motion Pictures and Maruti International.

The trailer of Great Grand Masti starts with the trademark ill-humored adult jokes with genitalia innuendos and over-expressive acting. The lead actors also look in their general form. With suggestive expressions all over the first minute of the trailer. However, the trailer picks up with the entry of the subject of the movie.

This movie will revolve around the trio who are seduced by a lady, who turns out to be a spirit or a ghost, played by Urvashi Rautela. The concept is exciting and it would be fun to watch it play out as expected. However, We are equally afraid that the over-expressive gags will tone down the fun in the movie. Also, we must admit, that the title track is pretty impressive in the trailer.

Urvashi Rautela pretty much owns the complete trailer since her intro scene. She is superb in her expressions and body gestures. Or possibly, the trailer editor did a fantastic job at sorting all her best bits into a trailer. However, not just solo performance, she seems to induce better gags with the lead trio. So basically, for us, the trailer was all about Urvashi Rautela. Having said that, I must also agree that I am a big fan of Urvashi(she is like, a HUGE crush, that sort of fan I am.) but that is not a factor in reviewing the trailer.

Also, I must say, Sanjay Mishra owns the one scene that he is given in the trailer. We just can’t wait to watch more.

Best moment from the trailer

The best moment in the trailer for us would be the introduction of Urvashi Rautela’s character. Here, watch it yourself. Isn’t it awesome?

Watch the trailer yourself right here.